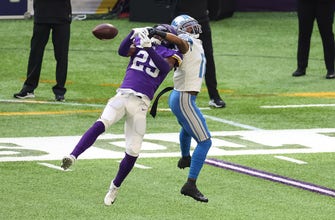 Can we call Mike Zimmer the cornerback whisperer once again?

The Minnesota Vikings went into their Week 9 tilt with the Detroit Lions without three cornerbacks – Cameron Dantzler (concussion), Mark Fields (chest) and Holton Hill (foot). Not to mention, former first-round pick Mike Hughes, currently on injured reserve, could be out for the season with a neck injury.

That left the defensive back duties against quarterback Matthew Stafford to Kris Boyd, Jeff Gladney and Chris Jones – a trio with just 10 career NFL starts between them.

And for the most part, the patched-up secondary held the Lions in check. Stafford cruised through the first half, throwing for 123 yards and a score on 16-of-18 passing. However, he struggled after the break. Stafford completed just 7 of 14 attempts for 88 yards and two interceptions in the second half before exiting the game early in the fourth quarter.

Although neither of Stafford’s interceptions were hauled in by cornerbacks (and a third by backup quarterback Chase Daniel was caught by safety Harrison Smith), credit is due to the young trio.

In back-to-back weeks, the Vikings secondary has done just enough to sneak out wins against Stafford and Green Bay’s Aaron Rodgers, an NFC North duo with nine Pro Bowl appearances between them.

Maybe Zimmer is the cornerback whisperer once again.

— Ameer Abdullah played exactly one snap against Detroit, the team which drafted him in the second round (54th overall) in 2015. He made the most of it. With 15 seconds left in the second quarter, Abdullah grabbed a screen pass from Kirk Cousins and ran it 22 yards into the end zone for a touchdown. It was Abdullah’s 11th career score and second with the Vikings.

— Despite playing in just 22 snaps — his lowest mark this season — tight end Irv Smith Jr. caught a pair of touchdown passes for his first career multi-score game. Fellow tight end Kyle Rudolph was on the field for nearly twice the action (42 snaps) and caught three passes for 40 yards.

— Eric Wilson hasn’t missed a single defensive snap since he took over at starting linebacker after Anthony Barr suffered a season-ending pectoral injury in Week 2. Wilson was the Vikings’ best defensive player against Detroit, leading the team in tackles (13) while logging one quarterback hit, one pass defensed and a key interception. He was also credited with a half sack.

— While running back Dalvin Cook’s production continues to skyrocket (478 yards and six touchdowns over the last two weeks), wide receiver Justin Jefferson’s role has taken a back seat. Jefferson, who played 77% or more of the snaps from Week 3 to Week 6, was on the field for 65% of the snaps against Green Bay in Week 8 and 60% against Detroit.

— Defensive tackle Abdullah Anderson, who was elevated from the practice squad before Week 9, made his Vikings debut with 10 snaps against the Lions. He did not record any statistics.