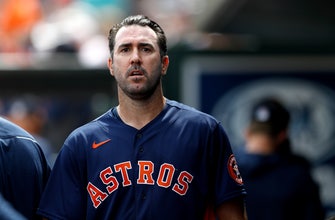 WEST PALM BEACH, Fla. (AP) — Houston ace Justin Verlander has a mild strain of a back muscle and said it would “probably take a miracle” for him to pitch in the Astros’ opener at Oakland on March 26.

The reigning AL Cy Young Award winner was hurt on his second-to-last pitch in Sunday’s exhibition game against the New York Mets. He had an MRI on Monday and was diagnosed with a strained latissimus dorsi muscle. There is not a timetable for his return.

The 37-year-old right-hander’s velocity was down from his previous start, and he was removed after two scoreless innings of what had been scheduled as a four-inning outing. The lat began to tighten as he sat in the dugout between innings.

Groin tightness slowed Verlander’s progress earlier in spring training. He said he did not know whether the two issues were related.

Verlander had a siimilar lat injury during spring training in 2015 and did not make his season debut until June 13. He said he does not think his current strain is as severe.

A two-time Cy Young winner and the 2011 AL MVP, Verlander was 21-6 with a 2.58 ERA last year as Houston won its second AL pennant in three seasons.