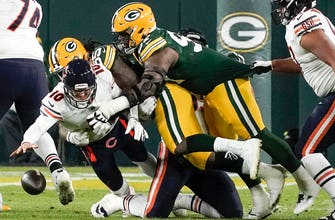 There were a couple of things confirmed Sunday night at Lambeau Field: The Green Bay Packers are a playoff team. Chicago is definitely not.

Behind four touchdown passes from Aaron Rodgers and a balanced offensive attack, the Packers rolled to a 41-25 victory over the rival Bears to improve to 8-3 on the season.

Former first-round pick Mitchell Trubisky was back under center for Chicago, making his first start since Week 3. It went about as expected. He completed 26 of 46 pass attempts for 242 yards, three touchdowns and two interceptions.

The Packers scored on their first three possessions of the game — receptions from Davante Adams, Marcedes Lewis and Allen Lazard — and found the end zone on five of seven possessions. Green Bay’s defense forced three turnovers and allowed just 5.2 yards per pass attempt.

It was an all-around encouraging game for the Packers, who remain one game back of New Orleans (9-2) for the top seed in the NFC.

Darnell Savage was a monster in the secondary, capturing two interceptions in the Packers’ win. On his first interception, Trubisky fired one deep in the end zone for Bears wide receiver Darnell Mooney, who had no room to breathe and was double covered by Savage and Chandon Sullivan. Savage caught it in stride like he was targeted on the pass. Later on, in the third quarter, Trubisky hurled one for Anthony Miller – this time in triple coverage – and Savage jumped up and snagged it. Savage is the first Packers player to have two picks in a game since Ha Ha Clinton-Dix on Dec. 18, 2016 against quarterback Matt Barkley and the Bears.

Another one, courtesy of @darnellsavage_ #GoPackGo

Rodgers was a wizard Sunday night. He consistently avoided trouble in the pocket and found a flurry of open receivers, connecting with seven different players for catches. Rodgers finished with 211 yards, four touchdowns and no picks on 21-of-29 passing. It was his fifth game this season with four touchdown passes and no interceptions. For context, the Bears have seen one game with 4+ passing scores and no picks since 2015.

Giving Aaron Rodgers 6 seconds to throw is… not advised#GoPackGo

Late in the second quarter, Trubisky and the lowly Bears offense faced a third-and-17. The pocket collapsed almost immediately after the snap, and Za’Darius Smith knocked the football loose as he sacked Trubisky. His partner in crime, Preston Smith, scooped up the fumble and trotted 14 yards the other way into the end zone. It increased the Packers’ lead to 27-3 and put the game well out of reach for Chicago.

Hi @USFWSMidwest, can you please help the Bears?

8 – With two picks and one fumble recovery against Chicago, the Packers defense now has eight takeaways over its last four contests. Green Bay forced just four turnovers over its first seven games. The Packers are now tied for 11th in the NFL with a +3 turnover differential.

“This is as good as I’ve ever seen anybody play. Just his ability to go out there and get us in the right looks. And, shoot, even when I make a bad call, he definitely makes us look good. In my eyes, he’s an MVP player. No doubt about it. I wouldn’t want any other quarterback on our football team.” – head coach Matt LaFleur on Rodgers

“That’s attitude football and that’s something we have to carry over. That’s a standard we need to keep week in and week out.” – left tackle David Bakhtiari

“For a soon-to-be 37-year-old, that’s my dream. That’s an amazing feeling to go home and not be feeling like an almost-37-year-old. I’ve been feeling really, really good all season, so I appreciate those boys up front. This was a really important game for us.” – Rodgers on not being sacked

The Packers will stick around Lambeau Field to host the Philadelphia Eagles (3-6-1) at 3:25 p.m. Sunday. Green Bay’s red-hot defense will be licking its chops to face Philadelphia quarterback Carson Wentz, who leads the NFL with 14 interceptions and has also coughed up four fumbles.