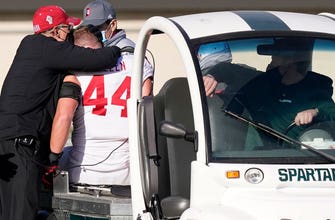 INDIANAPOLIS — Tom Allen rubbed his chin, took a couple of deep breaths and composed himself Monday.

It was yet another moment for the college football world to steal a glimpse of the pure, raw emotion flowing through the Indiana coach. Allen proudly embraces letting others see what fuels him, even if it involves his injured son, a Hoosiers linebacker, and especially now as fans increasingly follow the No. 9 Hoosiers (4-0) and their best start in decades.

The fun moments have been must-see videos — the 50-year-old Allen crowd-surfing through the locker room, players chanting “We love you” and the cheek wound he suffered after sprinting down the sideline to hug Devon Matthews following an interception.

But with Indiana’s biggest game since its 1967 Rose Bowl season looming Saturday at No. 3 Ohio State (3-0), Allen struggled with the reality that his son, Thomas, would miss the rest of this historic season with a fractured hip.

“It’s been a long journey, but it’s been awesome. My kids have sacrificed, my wife,” Allen said, pausing. “That’s why I hurt so much for Thomas, because I know what he’s been through to get here. He’s a tough sucker.”

Those who know Allen understand this is real as it gets.

He put this long-languishing program back on the national map with an unwavering set of principles — playing with conviction, confidence and spirit, demanding accountability, developing the kind of relationships coaches respect and players revere, and making sure priorities take precedence over wins and losses.

That includes being a father first.

It took former Indiana athletic director Fred Glass one phone call to recognize Allen’s unique skill set would be a perfect fit as the Hoosiers’ new defensive coordinator in 2016. Then, just weeks before Indiana made its first bowl appearance in nine seasons, Glass fired head coach Kevin Wilson, now the Buckeyes’ offensive coordinator, and handed the reins to Allen. Why?

“He’s authentic, I’d say that’s his greatest quality,” Glass told The Associated Press on Monday. “He’s the same guy on the sideline as he is when he’s talking to the coaches, when he’s talking to the kids, and the kids respond to that. Some coaches, I think, try to relate too much with the kids. He’s got his administrator’s license and some might say he’s a little nerdy, but he is who he is. I think that makes it OK for those kids to be who they are.”

Allen has never been shy about sharing his innermost thoughts or that he has bigger responsibilities than coaching.

So before taking questions after last week’s school-record-tying fifth straight league win, before singing and dancing with the Old Brass Spittoon, before reflecting on how the Hoosiers’ defense handed Michigan State its first shutout at home since 1985, Allen made two critical stops.

The first was to the golf cart where everyone watched Tom Allen hug and kiss his injured son. Teammates soon gathered to offer their support before the linebacker was taken off the field. The second came after the final gun, and included some tears and prayer.

“I just love him so much,” Allen said after the game. “It’s hard, it’s hard to see your son out there. I knew by the way he responded that it was serious. It’s hard to stand there and see that and then have to keep coaching, but that’s what you have to do.”

Allen said his son’s injury is similar to the one that sidelined Alabama quarterback Tua Tagovailoa last year. The IU linebacker is scheduled for surgery Tuesday.

It’s not the first time the Allen family has embarked on this journey. Last season during a win at Nebraska, Thomas Allen suffered a left shoulder injury.

“Unfortunately, I’d seen that movie before,” Glass said. “When we were at Nebraska last year, we beat them for the first time there in 60 years in front of 90,000 people, many of whom were unfortunately booing Thomas because they thought he was faking the injury and trying to slow down the game.”

A couple of weeks later, Thomas Allen had season-ending surgery and the COVID-19 pandemic cost him the use of Indiana’s team facilities to rehab. Yet he still he made it back for the start of the season, which excited Tom Allen every bit as much as any of Indiana’s first four wins.

Allen feels the same way about every player on the roster, and it’s something he wants them to see and feel.