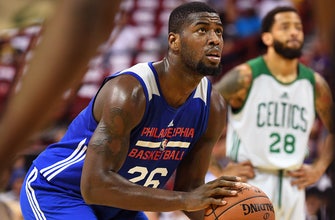 Lessort, who was a second-round pick (No. 50 overall) by Philadelphia in 2017, has yet to make his NBA debut. The 25-year-old currently plays for AS Monaco in the French Pro A League. A professional for seven seasons, Lessort averaged 7.5 points and 4.9 rebounds per contest while shooting 59% from the field.

Oturu, who attended Cretin-Derham Hall in St. Paul, Minn., played two seasons for the Gophers from 2018-20. As a sophomore last season, Oturu averaged 20.1 points, 11.3 rebounds and 2.5 blocks per game. He posted a double-double in 18 of 31 games and was named to the All-Big Ten first team.

Oturu will be reunited in L.A. with former Gophers star Amir Coffey, who appeared in 18 regular-season games and three playoff contests for the Clippers last season.