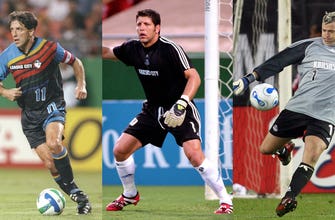 Preki, Tony Meola and Kevin Hartman made the league’s The 25 Greatest list announced by MLS on Wednesday as part of the league’s celebration of its 25th season.

The 25 players were selected by a panel of more than 200 MLS experts from across North America, including former MLS players, coaches and staff, current MLS club staff, media members and local and national broadcast partners.

Preki, who played for Sporting KC for nine seasons, is the only multiple MLS MVP award winner (1997 and 2003). The midfielder was an eight-time MLS All-Star and a four-time member of the MLS Best XI, and he was on five MLS Cup Playoff teams, including the 2000 MLS Cup champion.

Preki ranks fifth in MLS history with 112 regular-season assists and is Sporting’s career leader in goals (71) and assists (98) in the regular season. He was inducted into the National Soccer Hall of Fame in 2010.

Meola, a Sporting star for six seasons, also was a member of the club’s 2000 MLS Cup champion, a season in which he was named MLS MVP, MLS Goalkeeper of the Year, MLS Best XI and MLS Cup MVP. The five-time MLS All-Star recorded a 681-minute shutout streak and 16 shutouts, both of which remain MLS records, and he ranks second in MLS history with 1,136 saves. He was voted into the National Soccer Hall of Fame in 2012.

Hartman spent three seasons in Kansas City after a long stint as the LA Galaxy’s goalkeeper. He started every MLS match for Sporting from 2007-09, finishing with 100 appearances for the club in all competitions. He won two MLS Cups with the LA Galaxy in an MLS career that spanned from 1997-2013.