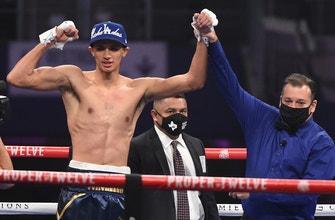 Sebastian Fundora continued his fast ascent in the 154-pound division, defeating Habib Ahmed by second-round TKO by forced referee stoppage. Fundora is now 16-0-1 in his career with 11 knockouts. Hear what Fundora says he has planned for his immediate future as he continues to be a rising PBC star.