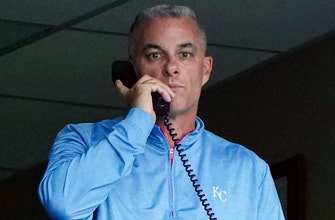 The architect of the Kansas City Royals‘ return to world championship status is a Hall of Famer.

Dayton Moore, the Royals’ vice president-baseball operations and general manager, will be inducted in the Missouri Sports Hall of Fame on Jan. 31, the team announced Monday. He is among 20 sports figures and teams who will be enshrined.

Moore is entering his 15th season with the Royals. He was the GM who constructed Kansas City’s 2014 and 2015 American League pennant winners and the 2015 World Series champion — the franchise’s first in 30 years.

Moore also been heavily involved in local philanthropy. In 2013, he established the “C” You In the Major Leagues Foundation, which supports youth baseball, education, families in crisis and faith-based programs and organizations. Under his direction, the Kansas City Urban Youth Academy officially opened in 2017, a $21 million facility that supports youth baseball and softball development, character development and advancement for urban youth.