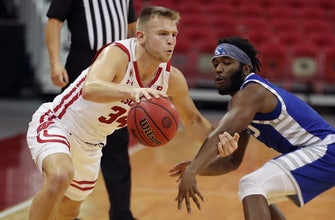 MADISON, Wis. — Nate Reuvers had 18 points and nine rebounds to lead No. 7 Wisconsin past Eastern Illinois 77-67 on Wednesday night in the season opener for both teams.

Ben Carlson came off the bench to score 13 points for the Badgers, and D’Mitrik Trice added 11.

Eastern Illinois put itself in a hole by shooting poorly in the first half (24% from the field), failing to take care of the ball (six turnovers) and playing porous defense as the Badgers shot 52 percent in the opening period.

But after falling behind 43-20 at halftime, a 16-4 run early in the second half pulled the Panthers to 56-42. Wallace later closed the gap to 12 points midway through the second half.

But Tyler Wahl scored on a drive and a dunk on back-to-back possessions, Carlson drained a 3-pointer and the threat was snuffed out. Eastern Illinois only trimmed the margin to 10 in the final minute with Wisconsin’s starters on the bench.

BIG MEN ON THE FLOOR

One of the big questions for the Badgers heading into the season was how coach Greg Gard would use the 6-foot-11 Reuvers and 6-10 Micah Potter. The pair only started three games together last season after Potter became eligible in December following his transfer from Ohio State. Still, Potter was second on the team in scoring at 10 points per game behind Reuvers at 13 ppg. The pair started both halves as Gard mixed and matched lineups. Potter finished with nine points and eight rebounds. He also limped off the floor gingerly early in the second half, got treatment and returned.

Eastern Illinois: The Panthers shrugged off their early struggles to give the Badgers a test for part of the second half. But it simply wasn’t enough.

Wisconsin: It wasn’t as easy as many would’ve expected, and the Badgers have some things to clean up. But this senior-laden team is thinking more about where it will be this spring than a tune-up in late November.