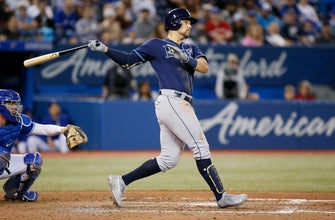 The following is a press release from the Texas Rangers:

Arlington, Texas — The Texas Rangers this afternoon announced that the club has acquired first basemen Nate Lowe and Jake Guenther, along with a player to be named later, in a trade with the Tampa Bay Rays.  The Rangers have sent three minor league players to the Rays in the trade: infielder Osleivis Basabe (oh-SLAY-veece bah-SAH-bay), catcher/outfielder Heriberto Hernandez (hairy-BAIR-toh) and outfielder Alexander Ovalles (oh-VYE-ace).

The 6-foot-4, 220-pound Lowe has seen MLB action in each of the past two seasons with the Rays, batting a combined .251/.322/.447/.770 with 11 home runs and 30 RBI over 71 games.  He has played almost exclusively at first base in his professional career, but has also seen time at third base.  Originally selected in the 13th round of the 2016 June draft, the Mississippi State product was the Tampa Bay Minor League Player of the Year in 2018, when he combined to bat .330/.416/.568/.985 with 27 home runs and 102 RBI with the system’s top three affiliates.  He was named one of Baseball America’s top 100 prospects following his breakout 2018 performance.  Nate’s younger brother, Josh, was the Rays’ first round selection in the 2016 June draft, and he spent the season at the club’s Alternate Site in Port Charlotte, Fla.

Guenther, 23, did not see game action in 2020, but was part of the Rays’ fall instructional league camp in Florida.  The 6-foot-4, 225-pound Wisconsin native saw his only professional action in 2019 with Princeton of the Rookie Appalachian League, when he batted .320/.431/.423/.853 over 48 games with 23 walks against 26 strikeouts.  Primarily a first baseman, the left-handed batter and thrower has also appeared at all three outfield positions in his brief pro career.

Basabe, Hernandez, and Ovalles are all 20 years old.  Each of the three players appeared for Texas in this year’s fall instructional league, and none of the trio spent any time at the club’s Alternate Site in 2020.

Basabe, who appeared in 2 Spring Training games for Texas in March, hit a combined .323 with AZL Rangers (Rookie) and Spokane (Low-A) in his last official game action in 2019.  Hernandez posted a combined 1.071 OPS figure with the AZL Rangers and Spokane in 2019, his second professional campaign after signing with Texas as a non-drafted free agent in 2017.  Ovalles was acquired from Chicago-NL on August 14, 2018 to complete the Cole Hamels trade of July 27 that year, and played for Spokane and AZL Rangers in 2019.

With the addition of Lowe, the Rangers are now at the 40-man limit on the club’s Major League roster.