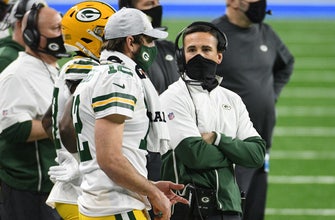 All the concern about how well Green Bay Packers coach Matt LaFleur would work with veteran quarterback Aaron Rodgers have disappeared near the end of their second season together.

LaFleur, who came to Green Bay after one unremarkable season as the Tennessee Titans’ offensive coordinator, has teamed with Rodgers to make Green Bay one of the NFL’s most dynamic offenses.

“We’ve had a great time together,” Rodgers said. “We’ve been laughing all the way to the NFC championship (game) last year and back in the playoffs this year about any question about our working relationship. It’s been a lot of fun working together.”

The 41-year-old LaFleur has emerged as one of the league’s bright young coaches as he prepares to face his former boss Sunday night when the NFC North champion Packers (11-3) host the Titans in a matchup between two of the NFL’s highest-scoring teams. Mike Vrabel has the Titans (10-4) on the verge of a second straight playoff berth.

LaFleur owns a 24-6 record at Green Bay and is one of only six coaches in NFL history to win at least 24 of their first 30 games. He’s come a long way since that 2018 season at Tennessee, when the Titans ranked 25th in yards per game and 27th in points per game while going 9-7 and failing to reach the playoffs.

Yet LaFleur says he learned plenty from that year working with Vrabel, who held everyone accountable, from his coaches to every player on the roster.

“He was really direct in his communication, laid out the expectations,” LaFleur said. “(They) were crystal clear for everybody. You knew where you stood and what your responsibilities were and what the expectations were. I thought he did an outstanding job with that. It’s something I’ve tried to carry over, as well.”

When the Packers struggled to score last season, it led to questions on how long it might take for Rodgers to get comfortable with LaFleur’s offense. The move from Mike McCarthy to LaFleur after the 2018 season was Green Bay’s first head coaching change since Rodgers took over as starting quarterback in 2008.

When the Packers traded up four spots to draft Utah State quarterback Jordan Love in the first round in April, speculation intensified about Rodgers’ long-term future in Green Bay.

Rodgers and LaFleur have responded by helping the Packers (11-3) boast one of the NFL’s most high-powered offenses. They jump on teams early by scoring 31 points per game, up from 23.5 last season.

And Rodgers has produced one of the finest seasons of his Hall of Fame-caliber career by throwing 40 touchdown passes and only four interceptions.

LaFleur has praised Rodgers throughout the season and called him the MVP front-runner last week. Rodgers has complimented LaFleur’s play-calling while noting how the team’s offseason Zoom sessions helped them build chemistry. Rodgers also credited LaFleur for assembling a quality group of assistant coaches.

Green Bay’s offense had one of its few hiccups last week, as the Packers scored touchdowns on their first three drives but gained only 49 yards after halftime in a 24-16 victory over the Carolina Panthers.

That gives the Packers plenty of incentive as LaFleur gets ready to match up with Vrabel, who has noticed how well his former offensive coordinator has fared in Green Bay. Sunday’s game will mark the first time the third-year Titans coach has matched wits with a head coach who once worked on his staff.

“I think Matt’s got a confidence to him about what he believes in,” Vrabel said. “I think he’s a hard worker. I think he’s got a toughness to him, having been in a lot of different places, worked his way up. Not afraid to move his family for another opportunity and then turn that opportunity into something else. Those are all really strong qualities. I do think he has learned from the people that he’s been around, and he’s been around a lot of great coaches.”

LaFleur looks forward to showing Vrabel how much he’s grown over the last couple seasons.

“I really enjoyed my time in Tennessee, like I said, learned a lot,” LaFleur said. “Now I hope we come up with a good game plan, play our best football and go beat their butt.”

STREAKS, STATS AND NOTES — Green Bay has won four straight games. Tennessee has won four of its last five. … This game pits two of the NFL’s highest-scoring teams. The Titans lead the NFL with 436 total points. The Packers are third with 434 points. … The Titans need a win to clinch a playoff berth for a second straight year and third in four seasons. Tennessee also can clinch with a loss by either Baltimore or Miami. The Titans can clinch their first AFC South title since 2008 with a win and a loss by the Colts. … The Titans are 3-0 against the NFC North this season. … The Titans average 399.4 yards per game to rank second in the league. Tennessee is the fifth team in NFL history with five straight games with at least 420 yards offense and at least 30 points. … Titans QB Ryan Tannehill had a career-high five TDs combined last week. … NFL rushing leader Derrick Henry ran for 147 yards and a TD and now has a career-high 1,679 yards rushing. He became the fourth player in NFL history to run for 1,500 yards and 15 TDs in back-to-back seasons. His 15 TD runs are tied for the league lead. … Titans WR A.J. Brown has 18 TD catches since entering the NFL in 2019, the fifth-highest total in that span. … The Packers already have clinched the NFC North title. They can clinch the top seed in the NFC playoffs this week if they beat Tennessee while the Los Angeles Rams beat or tie Seattle. … Packers QB Aaron Rodgers has thrown an NFL-leading 40 TD passes with only four INTs. … Packers WR Davante Adams has 14 TD catches to rank second in the NFL, behind Kansas City’s Tyreek Hill (15). … Packers RB Aaron Jones has rushed for at least 130 yards in two of his last three games, including a 145-yard outburst last week against Carolina. … Packers OLB Za’Darius Smith has 11 ½ sacks to rank fourth in the league. … Green Bay K Mason Crosby has made 18 straight field-goal attempts and is 16 of 16 this season, including a 57-yarder and a 51-yarder in his last two games. He has missed three extra-point attempts, however. … The Packers will look to bounce back on offense after struggling through the final two quarters against Carolina. Green Bay scored touchdowns on its first three possessions of that game but gained just 49 yards after halftime. … This game is the first between Titans coach Mike Vrabel and his first offensive coordinator, now Packers coach Matt LaFleur. … The Packers had seven players selected to the Pro Bowl this week: Adams, CB Jaire Alexander, OT David Bakhtiari, G Elgton Jenkins, Jones, Rodgers and Za’Darius Smith. The Titans’ only Pro Bowl selections were Henry and Brown. … The Titans and Packers each have nine turnovers this season, tied for the fewest in the NFL. … Fantasy tip: Tennessee’s Corey Davis has 326 yards receiving and two touchdown catches over his last three games. Assuming Alexander’s presence in the secondary makes it tough for Brown to get open, the Titans could end up targeting Davis instead, making him worth a start.