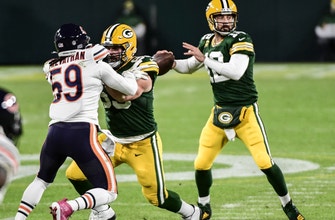 Something else they would like before the playoffs begin? The No. 1 seed and the bye that comes with it.

Rodgers and the Packers will try to clinch it when they close out the regular season against the playoff-hopeful Chicago Bears on Sunday.

“I think our guys have been locked in,” coach Matt LaFleur said. “I’ve been really pleased with just the urgency, the effort, the communication, the energy around our building for the last month and a half.”

The Packers (12-3), who pounded Tennessee last week, began their win streak by dominating the Bears at Lambeau Field. If they beat or tie Chicago (8-7), the No. 1 seed is theirs. A loss or tie by Seattle against San Francisco would also do it for Green Bay.

The Bears have scored 30 or more points in four straight games for the first time since 1965. And if they beat the Packers, they will make the playoffs for the second time in coach Matt Nagy’s three seasons.

It’s quite a turnaround after losing six in a row. But the Bears bounced back with three straight wins against struggling teams, beating Houston, Minnesota and Jacksonville.

The oldest rivalry in the NFL has been a rather one-sided affair in recent years, with Green Bay winning 18 of 21 against Chicago counting the postseason. The Bears can still reach the playoffs with a loss if Arizona falls on the road against the Los Angeles Rams. And if both games end in ties, the Bears would be playoff bound.

“When you lose six games like we did, you really rely on the players and coaches that you have inside this building here at Halas (Hall),” Nagy said. “And it’s not easy. It’s not easy for them, it’s not easy for us. But what our guys did is they showed resolve and they kept fighting.”

Rodgers has one last chance this season to make his case for winning a third MVP.

The Packers are 20-5 against the Bears in games Rodgers has started, including the playoffs. He threw four touchdown passes without an interception against Chicago last month.

“We both have something to play for,” Rodgers said. “We’re playing for the 1 seed, they’re playing for their playoff lives, so there’s a lot at stake for both squads. We got after them a few weeks ago; they’ve been playing a lot better since then. We know what kind of game it’s going to be.”

Quarterback Mitchell Trubisky and star receiver Allen Robinson could be playing their final game for Chicago, with their contracts expiring.

For Trubisky, it has been a turbulent run since the Bears drafted him with the No. 2 pick in 2017. The Bears made an offseason trade for Nick Foles and opted not to exercise their option for 2021 on their once-prized QB. Trubisky opened the season as the starter, only to get benched in Week 3. But he has performed better in the five games since he returned to the lineup, completing 68% of his passes for 1,243 yards, 10 touchdowns and four interceptions.

Adams has 17 touchdown catches, one off the team record Sharpe set in 1994. Adams also has 109 overall receptions, two off his own career high and three behind Sharpe’s 1993 franchise-record total.

Adams has accomplished all this despite missing two games with a hamstring injury.

The Packers have outscored opponents 198-86 in the second quarter this season. They outscored the Bears 21-7 in the second period during the first regular-season meeting between these teams.

If the Packers get any points in the second period Sunday, they will become the highest-scoring, second-quarter team in NFL history. The New England Patriots have the NFL record for second-quarter points in a season with 199 in 2007, according to the Elias Sports Bureau.

The Bears could become the third team since the 1970 merger to reach the playoffs after losing six in a row. The 1970 Cincinnati Bengals and 2014 Carolina Panthers also did it.

STREAKS, STATS AND NOTES — The Packers have won five straight games and clinched the NFC North. They can lock up the No. 1 seed and a bye with a win or tie against Chicago, or a loss or tie by Seattle against San Francisco. … Green Bay has won 18 of 21 against Chicago, including the playoffs. … Green Bay has scored an NFL-leading 31.6 points per game. … QB Aaron Rodgers has thrown 44 touchdown passes with only five interceptions. He is one off his career high of 45 touchdown passes, set in his first MVP season of 2011. … WR Davante Adams is one of only three NFL players to have at least 100 catches and 17 touchdown receptions in the same season. The others are Cris Carter in 1999 and Randy Moss in 2003. Adams’ 17 touchdown catches are one away from Sterling Sharpe’s team record in 1994. His 109 overall receptions are three behind Sharpe’s franchise mark in 1993. … The Bears, trying to reach the playoffs for the second time in coach Matt Nagy’s three season, would get in with a win. They can also make it with a loss if the Arizona Cardinals drop their road game against the Los Angeles Rams. And if both games end in ties, Chicago would be in the playoffs. … The Bears could join the 1970 Cincinnati Bengals and 2014 Carolina Panthers as the only teams since the 1970 merger to make the playoffs despite a six-game losing streak. … The Bears have won three in a row, beating Houston, Minnesota and Jacksonville. Those teams are a combined 11-34. … Chicago has scored 30 or more points in four straight games for the first time since 1965. The Bears haven’t done it in five or more since 1956, when they did it in seven consecutive games. … QB Mitchell Trubisky has a 99.3 rating in the five games since he returned to the lineup, completing 68% of his passes for 1,243 yards, 10 touchdowns and four interceptions. … WR Allen Robinson has a career-high 100 receptions for 1,213 yards. Only Brandon Marshall (118 in 2012) and Matt Forte (102 in 2014) have caught more passes in a season for Chicago. … K Cairo Santos has made 24 consecutive field goals, tying Robbie Gould‘s single-season franchise record in 2006. … Fantasy tip: Rodgers is 20-5 against Chicago, counting the playoffs. And with plenty riding on this game, expect the two-time MVP to give the Monsters of the Midway plenty of trouble.