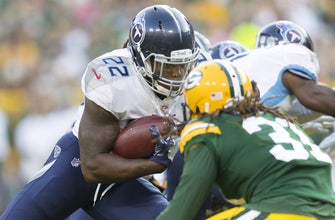 An inability to stop the run cost Green Bay a Super Bowl berth in January. Playoff-bound again, the Packers are about to find out how much they’ve improved in that area.

Tennessee’s Derrick Henry should give them a pretty good indication.

The NFL rushing leader heads into Lambeau Field on Sunday night having run for 362 yards over his last two games and a career-high 1,679 yards this season. Henry has rushed for at least 100 yards in each of his last nine road games, one off Barry Sanders’ NFL record.

“They know each and every week everybody’s going to come to try to stop the run,” Packers coach Matt LaFleur said of the Titans, “and nobody can do it.”

Green Bay (11-3) already has clinched the NFC North title and can guarantee itself the NFC’s No. 1 seed if it beats the Titans and the Los Angeles Rams beat or tie Seattle (10-4).

Tennessee (10-4) can clinch a second straight AFC playoff berth with a victory at Green Bay. Tennessee also can earn a spot in the postseason with a loss by either Baltimore or Miami. The Titans can clinch their first AFC South title since 2008 if Indianapolis loses to Pittsburgh earlier Sunday and they beat Green Bay.

The matchup also gives each team a chance to address perceived weaknesses.

Green Bay has improved its run defense since giving up 285 yards rushing in an NFC championship game loss to the San Francisco 49ers last season. But in the Packers’ three losses, they gave up 113 yards rushing to Tampa Bay’s Ronald Jones, 163 to Minnesota’s Dalvin Cook, and 90 to Indianapolis’ Jonathan Taylor.

Tennessee is on the verge of a playoff berth despite ranking 27th in the league in total defense and 29th in pass defense. That defense must deal with a high-powered Green Bay offense featuring MVP candidate Aaron Rodgers plus Pro Bowl selections Davante Adams and Aaron Jones.

Rodgers has thrown 40 touchdown passes with only four interceptions. Adams has 14 touchdown catches to rank second in the league. Jones has rushed for at least 130 yards in two of his last three games.

“I think we’re just going to have to do our best job to challenge these guys, try to be more physical than their entire offense, and forcing turnovers,” Titans safety Kevin Byard said. “I think that’s probably going to be the biggest thing in this game. (We) obviously might not have a lot of opportunities to intercept the ball but trying to punch the ball out, hammer it out, raking it out, those things.

RACKING UP THE POINTS

Tennessee and Green Bay are tightly bunched with the Super Bowl champion Kansas City Chiefs among the NFL scoring leaders.

This game gives Henry a chance to boost his MVP credentials as he will be on the same field with Rodgers, considered one of the favorites for the award along with Chiefs quarterback Patrick Mahomes and Bills QB Josh Allen.

Rodgers, Mahomes and Allen have earned most of the MVP buzz lately, but Henry is working his way into the conversation. The last non-quarterback to win the award was Adrian Peterson in 2012.

LaFleur was the offensive coordinator on Tennessee coach Mike Vrabel’s Titans staff in 2018 before the Packers hired him.

This will mark the first time Vrabel has faced off with a head coach who previously worked for him as an assistant.

Although Tennessee’s defense has struggled, the Titans have 21 takeaways. Their plus-12 turnover margin is tied with Indianapolis for the NFL lead.

Jenkins has earned a Pro Bowl invitation in his second season and could spend some time lining up against Simmons, a 2019 first-round draft pick.

“Practices at Mississippi State, we went back and forth – me playing center, him playing the nose guard – so every day I’d see him,” Jenkins said. “We used to always give each other a battle. I’m glad and happy that I’ll be able to play him this Sunday in a live game.”

STREAKS, STATS AND NOTES — Green Bay has won four straight games. Tennessee has won four of its last five. … This game pits two of the NFL’s highest-scoring teams. The Titans lead the NFL with 436 total points. The Packers are third with 434 points. … The Titans need a win to clinch a playoff berth for a second straight year and third in four seasons. Tennessee also can clinch with a loss by either Baltimore or Miami. The Titans can clinch their first AFC South title since 2008 with a win and a loss by the Colts. … The Titans are 3-0 against the NFC North this season. … The Titans average 399.4 yards per game to rank second in the league. Tennessee is the fifth team in NFL history with five straight games with at least 420 yards offense and at least 30 points. … Titans QB Ryan Tannehill had a career-high five TDs combined last week. … NFL rushing leader Derrick Henry ran for 147 yards and a TD and now has a career-high 1,679 yards rushing. He became the fourth player in NFL history to run for 1,500 yards and 15 TDs in back-to-back seasons. His 15 TD runs are tied for the league lead. … Titans WR A.J. Brown has 18 TD catches since entering the NFL in 2019, the fifth-highest total in that span. … The Packers already have clinched the NFC North title. They can clinch the top seed in the NFC playoffs this week if they beat Tennessee while the Los Angeles Rams beat or tie Seattle. … Packers QB Aaron Rodgers has thrown an NFL-leading 40 TD passes with only four INTs. … Packers WR Davante Adams has 14 TD catches to rank second in the NFL, behind Kansas City’s Tyreek Hill (15). … Packers RB Aaron Jones has rushed for at least 130 yards in two of his last three games, including a 145-yard outburst last week against Carolina. … Packers OLB Za’Darius Smith has 11 ½ sacks to rank fourth in the league. … Green Bay K Mason Crosby has made 18 straight field-goal attempts and is 16 of 16 this season, including a 57-yarder and a 51-yarder in his last two games. He has missed three extra-point attempts, however. … The Packers will look to bounce back on offense after struggling through the final two quarters against Carolina. Green Bay scored touchdowns on its first three possessions of that game but gained just 49 yards after halftime. … This game is the first between Titans coach Mike Vrabel and his first offensive coordinator, now Packers coach Matt LaFleur. … The Packers had seven players selected to the Pro Bowl this week: Adams, CB Jaire Alexander, OT David Bakhtiari, G Elgton Jenkins, Jones, Rodgers and Za’Darius Smith. The Titans’ only Pro Bowl selections were Henry and Brown. … The Titans and Packers each have nine turnovers this season, tied for the fewest in the NFL. … Fantasy tip: Tennessee’s Corey Davis has 326 yards receiving and two touchdown catches over his last three games. Assuming Alexander’s presence in the secondary makes it tough for Brown to get open, the Titans could end up targeting Davis instead, making him worth a start.