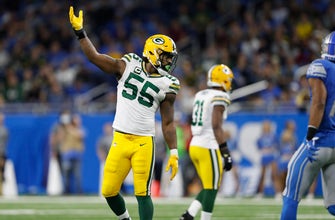 DETROIT — Aaron Rodgers had his 37th birthday recently and is showing no signs of slowing down.

In fact, Rodgers is having one of his best seasons for the Green Bay Packers as they close in on winning the NFC North for the seventh time since 2011.

The Packers (9-3) can repeat as division champions with a win on Sunday at Detroit (5-7) and a loss by Minnesota at Tampa Bay earlier in the day.

Even if the Vikings beat the Buccaneers, Green Bay can earn a postseason bid with a win at Ford Field and some losses by other teams.

With Rodgers under center, the odds of winning are in Green Bay’s favor against the Lions because he is 16-5 against them as a starter — and he’s playing some of his best football. He has the second-highest quarterback rating of his career, just behind his numbers from his 2011 MVP season and ahead of his production from the 2014 MVP season.

“No matter how old he is or what he’s accomplished, it’s all about competing and winning,” Lions linebacker Jamie Collins said. “He’s definitely having an MVP season and that whole offense looks good. He’s not missing a beat.”

Rodgers is in a groove during his second season directing Matt LaFleur’s offense, throwing seven touchdowns without an interception in his last two games. He has an NFL-high 36 touchdown passes, is completing 69% of his passes — his highest as a starter — and has been picked off on only 1% of his passes for a total of four times this season.

Last year, Rodgers had a quarterback rating of less than 100 for a third straight season and had his second-lowest completion percentage as a starter.

“Anytime that you’re in a system for as long as he has been prior to last year, there is a transition process,” LaFleur said. “From a coaching staff standpoint, we’ve done a much better job just giving more opportunity and more freedom to him. He’s shown great ownership in what we’re asking him to do and he’s going out there and playing at a really high level.”

Rodgers shrugs and sheds praise as if it is a blitzing linebacker. He’s quick to deflect credit to his offensive line, running back Aaron Jones, tight end Robert Tonyan and receiver Davante Adams.

Adrian Peterson acknowledged the Lions are having fun playing for interim coach Darrell Bevell after reeling under Matt Patricia, who was fired two weeks ago.

“Having the change, it shakes things up,” the 35-year-old running back said.

Adams has a touchdown reception in seven straight games, equaling the franchise record set by Hall of Famer Don Hutson, who had a pair of seven-game streaks in the 1940s.

“He is as good as they come,” Rodgers said. “I wouldn’t want to throw to anybody else.”

If Adams catches a touchdown pass against Detroit, he will have a career-high 14 TD receptions and his single-season streak will trail just the 12-game run Hall of Famer Jerry Rice had in 1987, and the nine-game stretch Cincinnati’s A.J. Green had in 2012.

The matchup will feature two tight ends that could’ve been teammates.

Green Bay’s Robert Tonyan signed with the Lions as an undrafted rookie out of Indiana State in 2017, was cut after training camp and closed that season on the Packers’ practice squad. After catching only one touchdown in 2018 and 2019, he has eight touchdowns to tie Kansas City’s Travis Kelce for the most among NFL players at the position.

T.J. Hockenson, drafted by Detroit No. 8 overall last year, ranks third among tight ends with 52 receptions and 614 yards receiving and is tied for sixth at his position with five touchdowns.

KEEPING UP WITH JONES

Detroit’s chances of pulling off an upset after losing 42-21 at Green Bay might depend on whether it can slow down Jones.

Jones rushed for a career-high 168 yards and two touchdowns and caught four passes for 68 yards and a touchdown in September against the Lions. He’s coming off a 130-yard rushing performance in a 30-16 victory over Philadelphia that he sealed with a career-long 77-yard touchdown run.

Detroit is only one game behind a wild-card spot in the NFC, but it won’t be easy to stay in contention because the next four opponents own .500 or better records: Green Bay, Tennessee, Tampa Bay and Minnesota

STREAKS, STATS AND NOTES: The Packers are 30-11 against the Lions since 2000 and 16-5 against them when QB Aaron Rodgers starts. … Green Bay is seeking to sweep the series with Detroit for the 10th time in the last 17 seasons. … The Packers can clinch the NFC North with a win over the Lions and a loss by Minnesota at Tampa Bay. … Green Bay can also qualify for the playoffs with a win at Detroit and a loss by Arizona, the Los Angeles Rams or a Seattle victory over the winless New York Jets. … Rodgers has thrown for an NFL-high 36 scores and is the league’s first player with 35-plus touchdowns in five seasons. … RB Aaron Jones, who had 130 yards rushing last week, ran for a career-high 168 yards against Detroit in September. … WR Davante Adams has a TD catch in seven straight games to tie Hall of Famer Don Hutson’s franchise record. Hutson had a pair of seven-game streaks during the 1941-42 and 1943-44 seasons. … Adams, Antonio Brown (2018) and Hall of Famer Terrell Owens (2007) are the three players in league history to have at least five catches and a TD reception in seven straight games in one season. … Adams has 13 TD catches, tied with Kansas City’s Tyreek Hill for the league lead. … S Darnell Savage has three interceptions over his last two games. … OLB Za’Darius Smith has 4 ½ sacks over his last five games. … The Packers had a season-high seven sacks against the Eagles. … Detroit scored two TDs in the final 2:18 last week at Chicago to win after being down 10 points in the fourth quarter in interim coach Darrell Bevell’s first game after replacing Matt Patricia. … The Lions are one game behind a wild-card spot in the NFC, but their last four games are against teams with .500 or better records: Green Bay, Tennessee, Tampa Bay and Minnesota. … Matthew Stafford has led 31 fourth-quarter comebacks, the most in the NFL since 2009, and his total ties Hall of Famer John Elway for seventh on the all-time list. … Stafford threw for 402 yards against the Bears, becoming the seventh player in NFL history with at least 10 games with 400 yards passing. … RB Adrian Peterson has run for two TDs in two straight games and with 28 career games with multiple rushing TDs, he trails just Hall of Famers LaDainian Tomlinson (38) and Emmitt Smith (36) in league history. … WR Marvin Jones had a season-high 116 yards receiving against Chicago and scored for the fifth time in six games. … LB Jamie Collins had 10 tackles last week and has had a sack in two straight games against the Packers. … DE Everson Griffen has 2 1/2 sacks and has defended two passes in his past four games. … Fantasy tip: Marvin Jones is a sneaky start. He has been targeted 12 times in each of the last two games and has eight receiving TDs in eight games against Green Bay.