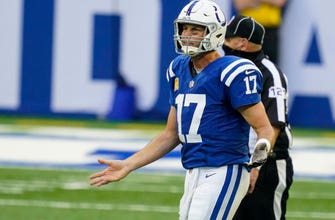 Win this weekend, get some help and he’ll have another shot to reach his first Super Bowl. Lose to Jacksonville on Sunday, and it could be the end of a remarkable career.

It’s the cold, harsh reality each NFL player faces every season, even someone as accomplished as the Indianapolis Colts‘ 39-year-old quarterback.

“I go, ‘Shoot, if things don’t go the way you want this weekend, who knows what happens?’” Rivers said Wednesday. “I guess it’s at least healthy to have that thought because you’re not guaranteed anything moving forward. But to think it could be the last game, yes, it has crossed my mind, the last game I ever play.”

Rivers recognizes his 17-year journey is winding down even if he’s not yet ready to hang up the cleats yet.

Last December, he heard critics say he was finished after throwing 20 interceptions. So when Rivers tearfully explained he’d given the Chargers everything he had for 16 years, it looked like he might retire. Six weeks later came the inevitable announcement — the Chargers and Rivers were parting ways.

Colts coach Frank Reich and general manager Chris Ballard saw something else in the eight-time Pro Bowler. They believed Rivers could rebound by helping solidify a young team that was rocked by the abrupt retirement of Andrew Luck just before the 2019 season opener. Rivers agreed to a one-year, $25 million deal.

While he hasn’t played at a Pro Bowl level this year, he has been good enough to keep Indy (10-5) in the postseason mix. To make it, the Colts need to beat the Jaguars (1-14) and have one of four teams — Baltimore, Cleveland, Miami or Tennessee — lose Sunday.

Without the steadying influence of Rivers, those inside the locker room realize Indy might not have gotten this far.

Rivers certainly has managed to overcome the twists and turns of an odd season.

Despite his poor opening-day performance in a loss at Jacksonville, the pick-six and inexcusable safety that proved so costly in an October loss at Cleveland and his whiff on a tackle attempt to prevent Baltimore from scoring on a fumble return, Rivers rebounded in the second half of the season by showing he still has it.

The Colts have won five of their past seven, a stretch during which the North Carolina State alum has completed 68.7% of his throws for 1,918 yards with 13 touchdowns and three interceptions.

Some believe he’s played well enough to come back for another go-around, especially with backup Jacoby Brissett likely leaving in free agency and rookie Jacob Eason waiting to throw his first NFL pass.

“I think Philip is playing great football,” Reich said before last week’s loss at Pittsburgh. “He is making very good decisions, obviously very accurate with the football. He just needs to continue to be disciplined, yet still have that arrow in his bag that he can strike deep at any time.”

Rivers continues adding milestones to an already sparkling resume and is on the cusp of hitting more this weekend.

Rivers needs one touchdown pass to break a tie for fifth all-time with Hall of Famer Dan Marino (420) and 12 pass attempts to supplant Eli Manning (8,118) for No. 6 in league history. Earlier this season, Rivers passed Marino for fifth in yards passing and completions, and his 133 regular-season wins are No. 8 on the league’s list.

The most impressive stat might be Rivers’ streak of 239 consecutive starts, which began in 2006 when he replaced Drew Brees as the Chargers’ starter. It’s the second-longest streak since 1970, behind only Brett Favre (297), and he can tie Julius Peppers (240) for the sixth-most career starts Sunday.

It would be a fitting occasion to go out, though that’s not necessarily the plan.

Yes, he’s already accepted a head coaching job at St. Michael Catholic High School in Alabama, a job Rivers wants to put on hold for at least a few more weeks or perhaps another season or two.

“Certainly, I don’t intend that it will be (the end), I don’t hope that it is, but certainly, I think you have to acknowledge that it is a possibility,” he said. “Ultimately, what means the most to you is what you have within you, what you know you can still do and what the people who know you best and care, what they think.”