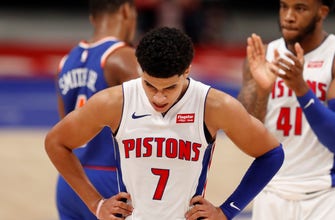 At Detroit, R.J. Barrett scored 15 points and Toppin finished with 11 points and seven rebounds in his debut as the Knicks won their preseason opener.

Svi Mykhailiuk and Saddiq Bey led the Pistons with 14 points apiece. None of Detroit’s five starters — all playing between 15 and 22 minutes — reached double figures, and they shot a combined 8 for 34.