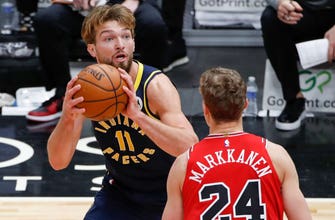 Domantas Sabonis is the first Eastern Conference Player of the Week for the 2020-21 season.

Sabonis led Indiana in scoring (24.3 points per game), rebounding (11.0) and assists (7.0) over the Pacers’ three wins to begin the year. He opened the season by setting a new career high with 32 points in Wednesday’s home win over the New York Knicks. Sabonis posted three double-doubles during the week, including the fifth triple-double of his career with 22 points, 10 rebounds and 11 assists in Saturday’s road win at Chicago. He capped a 19-point, 10-rebound performance with the go-ahead basket with 8.4 seconds remaining to lift the Pacers to a 108-107 win over Boston Sunday night.