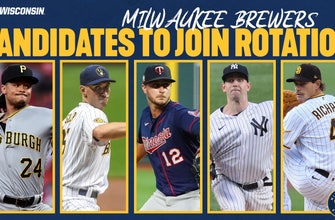 The Milwaukee Brewers’ starting rotation seems mostly set heading into the 2021 season – but there still looks to be (at least) one spot to fill.

The offseason to date hasn’t cleared up this conundrum and with less than a month before spring training is scheduled to begin, the question remains.

In last year’s shortened 60-game season, Milwaukee used eight different starting pitchers (which included a couple of “openers”), five of whom combined for 44 of them.

Below we’ll take a look at some potential ideas of who could be in the Brewers’ starting rotation, starting with those on the 40-man roster, delving into free agents still available and then others who are in the system or who will be camp:

Eric Lauer: In his first year with the Brewers after being acquired from San Diego, Lauer was late to the second training camp after coming in contact with someone who had COVID-19 (he did not test positive). He made only four appearances – with two starts – and was tagged for 16 runs in 11 innings. Lauer is just one of four left-handers on Milwaukee’s 40-man roster.

Josh Lindblom: Signed to a three-year contract after a successful two-year stint in Korea, Lindblom made 10 starts in 2020 with two relief appearances as well in early September. The results were mixed. His ERA was bloated (5.16), but he had a decent WHIP (1.276) and good K/9 (10.3). His longest starting stint, though, was just 5 1/3 innings.

Freddy Peralta: He seems destined to be in the bullpen but the Brewers did sign him to a contract extension through 2026 (the latter two years being team options), so perhaps they have bigger plans for him. Peralta started 14 games in 2018, eight in ’19 and just one (in 15 appearances) last season, when he recorded a 3.99 ERA, 1.159 WHIP and 14.4 K/9.

Brent Suter: Again, the expectation here is Suter remains in the bullpen with a few spot “opener” assignments like last season when he appeared in 16 games with four starts. He and Lauer are really the only left-handed candidates for the rotation currently on the 40-man. Suter had a 3.13 ERA, 1.105 WHIP and 10.8 K/9 in 31 2/3 innings in 2020.

Julio Teheran: Let’s be upfront: Teheran was horrible with the Angels last season. However, he had some quality seasons with Atlanta (3.67 ERA, 1.211 WHIP, 7.8 K/9 over nine years) where he was a two-time All-Star and will be 30 years old this season.

Aaron Ashby: The left-hander turns 23 in May but if he’s in the rotation it’d likely wouldn’t be until later in the season. Ashby was at the Brewers’ alternate training camp site but in 2019 he pitched for Single-A Wisconsin and Carolina, recording a combined 3.50 ERA, 1.278 WHIP and 9.6 K/9. MLB.com lists Ashby as Milwaukee’s No. 6 prospect.

Alec Bettinger: A right-hander who turns 26 in July, Bettinger had a 3.44 ERA, 1.066 WHIP and 9.7 K/9 in 26 starts at Double-A Biloxi in 2019. He, like every other minor leaguer listed in this section, was at Milwaukee’s alternate training site last season.

Ethan Small: Milwaukee’s first-round pick in 2019 has very little pro experience – 21 innings in the lower levels in 2019 – but he’ll be 24 in February. The left-hander, a former Mississippi State star, probably doesn’t need much more seasoning.