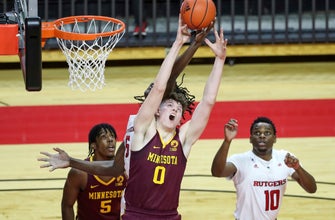 We are over a week into the month of February and March Madness is closer than ever.

As the college basketball season heats up, FOX Sports North rounds up what experts are saying about which seed the Minnesota Gophers will be assigned in the NCAA tournament — if they make it, of course. This is the second edition of the 2020-21 bracket roundup.

The Minnesota Golden Gophers are free-falling a bit after losing a tough road game 76-72 to the Rutgers Scarlet Knights on Thursday.

Minnesota’s loss to Rutgers follows an 81-62 defeat to the Purdue Boilermakers on January 30. Despite the fact that the Gophers have yet to win a Big Ten road game so far this season, it appears they are on track to make the NCAA Tournament for the third time in the seven-year Richard Pitino era.

The Gophers (11-7, 4-7 Big Ten) still have wins banked over quality opponents like Iowa, Michigan, Michigan State, Ohio State and Saint Louis, which should be insurance for some losses. Still, Minnesota cannot continue at its current pace (2-5 in last seven games) and expect to sputter into the tournament.

As of Sunday, Bracket Matrix, a website that tracks bracketology from all corners of the internet, has the Gophers checking in as a No. 9 seed.

The other teams with Minnesota in the No. 9 slots of Bracket Matrix are the undefeated Drake Bulldogs of the Missouri Valley Conference and Mountain West heavyweights Boise State and San Diego State.

Minnesota’s highest seed on Bracket Matrix came from WatchStadium.com that had it as a seven seed. Conversely, Haslametrics has the Gophers as a 12 seed, which is the lowest of any major site that does bracketology.

Check out some of the week’s notable brackets: