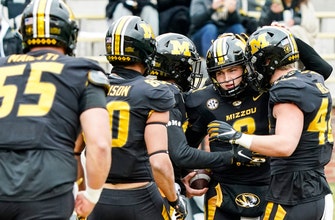 After a one-year postseason hiatus, the Missouri Tigers are going bowling again.

Mizzou announced Sunday afternoon that it has accepted an invitation to face Iowa in the TransPerfect Music City Bowl on Dec. 30 in Nashville, Tenn.

The #NewZou is going bowlin’! 🎳

This will be the Tigers’ first appearance in the Music City Bowl, and it’ll be the second time they’ve faced the Hawkeyes in a bowl game. Their only previous bowl matchup with Iowa came in a 27-24 Insight Bowl loss on Dec. 28, 2010.

The Tigers, who went 6-6 in Barry Odom’s final year as head coach in 2019, missed out on postseason action last season due to a one-year bowl ban handed down by the NCAA. Odom led them to two straight bowl appearances in 2017-18 prior to the NCAA sanctions.

After going 5-5 while playing a conference-only schedule this year due to the COVID-19 pandemic, they’ll now participate in their first bowl game under first-year head coach Eliah Drinkwitz. Drinkwitz joins Warren Powers as the only head coaches in program history to lead Mizzou to a bowl game in their first season.

The Tigers will have the opportunity to play in front of a limited crowd in Nashville, with Nissan Stadium being limited to a capacity of 20 percent. Both schools will be issued a small number of tickets to accommodate the families of the players and coaches.