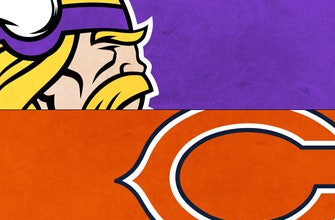 A few weeks ago saying Monday’s Minnesota-Chicago game was big for the Vikings might have been met with a raised eyebrow.

But after back-to-back wins Minnesota is, dare we say it, back in the playoff picture.

Beat the Bears, who have lost three straight, on Monday, the four teams with losing records and one other game and that’s 9-7. Good enough for a wild-card spot? Maybe.

But let’s not get ahead of ourselves. There’s still a Monday night game in Chicago and there’s mixed bag from prognosticators on who will emerge with a much-needed win.

Here’s this week’s Vikings predictions from around the web:

Sam Farmer of the Los Angeles Times: Bears 23, Vikings 21. “Not a good matchup for Minnesota, which can run it well but will have a hard time doing so against the Bears. Chicago’s offense should be able to move the ball, but ‘should’ is not a promise.”

Pete Prisco of CBSSports.com: Bears 26, Vikings 23. “The Vikings suddenly have life after two straight victories, while the Bears are reeling a bit. Dalvin Cook has been sensational this season and especially the past two weeks. But Chicago is solid against the run. That will matter here. Nick Foles has been ordinary, but he should be able to make enough plays to pull out a home victory.”

NFL.com’s Gregg Rosenthal: Vikings 24, Bears 17. “Dalvin Cook makes me believe in all the clichés I never did before: making the Vikings’ defense better by keeping the unit off the field, improving play-action with his mere presence and wearing down opponents by the fourth quarter. He’s giving Alvin Kamara a run for his money as the most valuable non-quarterback skill-position player in the league.”

Will Brinson of CBSSports.com: Bears 24, Vikings 17. “This will sound like sarcasm but it’s not: this game is ENORMOUS for the NFC North. The Bears are reeling (I, for one, am shocked) and the Vikings are coming on strong. Dalvin Cook is getting MVP buzz. Minnesota’s schedule after this game is great for making a push towards the playoffs. But I don’t think they match up well at all here. They want to run, and Chicago is good against the run. The Vikings struggle with big, physical receivers and Allen Robinson could eat in this game. I love the narrative of the Vikings really putting the Bears playoff hopes in the ground, but Kirk Cousins needs to beat Chicago convincingly first for me to buy in.”

John Breech of CBSSports.com: Bears 20, Vikings 17. “If Kirk Cousins has proven two things in his career, it’s that he can’t win on Monday nights and he can’t beat the Bears. Since signing with the Vikings in 2018, Cousins has gone 0-3 against Chicago and in those three losses, the Vikings have averaged just 12 points per game. Sure, Dalvin Cook has been the best running back in the NFL over the past few weeks, but I’m not sure that’s going to matter here, because no team has been better at slowing Cook down than the Bears. In Cousins’ three losses, Cook has averaged 28.7 yards per game. Basically, the Bears have been selling out on defense to stop Cook, which forces Cousins to win the game and Cousins never wins the game. Also, Cousins is 0-9 in his career on Monday nights, which is the worst record of any quarterback in NFL history.”

The Miami Herald’s Greg Cote: Vikings 24, Bears 20. “An NFC North battle of teams headed in different directions is the less-than-scintillating matchup for Monday night. Minnesota has won two in a row and Chicago has lost three straight. Bears have beaten Vikes four in a row, but see an end to that trend. Chitown tempts as home ‘dogs but doesn’t generate much on the attack under always-under-siege Nick Foles. Hotfoot Dalvin Cook leads the way.”

Vinnie Iyer of the Sporting News: Vikings 23, Bears 20. “The Vikings have been rolling by feeding Dalvin Cook, both taking pressure of Kirk Cousins and making life easier on a defense having major secondary issues. It’s much easier to run on the Bears than force throwing on them, which plays into the hands of Mike Zimmer’s game plan. The Bears will have some success throwing with Nick Foles to Allen Robinson and others, but they will be too one-dimensional with Foles feeling enough heat to make more mistakes.”

Bill Bender of the Sporting News: Vikings 24, Bears 21. “The Vikings are starting to climb back into the fringe of the NFC playoff race after back-to-back division wins. The Bears are trying to break a three-game losing streak. Kirk Cousins is 0-3 as a starter with Minnesota against Chicago, but he breaks that streak in a close game with the help of Dalvin Cook.”

Josh Schrock of NBC Sports Bay Area: Vikings 17, Bears 13. “It turns out the Bears were indeed fraudulent. Matt Nagy’s offense hasn’t looked any better with Nick Foles under center than it did when Mitch Trubisky was calling the shots. The Bears are spiraling fast and now they face a Vikings team with a bit of life and a red-hot Dalvin Cook who has been running over, around and through opponents over the past few weeks. The Vikings turn a couple of Foles turnovers into points and Kirk Cousins does just enough to deal a crippling blow to the Bears’ once-promising season.”

All six analysts at SI.com are picking the Vikings.

Only one of three writers at Athlon Sports pick the Vikings to win.