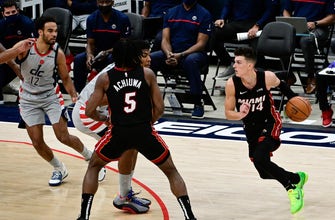 WASHINGTON (AP) — Tyler Herro scored a career-high 31 points and Jimmy Butler nearly had a triple-double with 26 points, 10 rebounds and nine assists as the Miami Heat beat the short-handed Washington Wizards 128-124 on Saturday night.

Miami (4-4) has alternated wins and losses through its first eight games. The Wizards (2-8) lost their third straight game and are winless in five home games.

Washington played without the NBA’s leading scorer, Bradley Beal, who was a late scratch when he was placed in the NBA’s Health and Safety Protocol.

They were also without their other starting guard, Russell Westbrook, out with a left quad injury. Westbrook, who had triple-doubles in his first four games with the Wizards, was intending to play the second half of a back-to-back for the first time after sitting out the first two.

Heat: G Goran Dragic had 21 points on seven 3-pointers. … C Bam Adebayo had 16 rebounds despite playing only 21 minutes due to foul trouble.

Wizards: Coach Scott Brooks was assessed a technical in the fourth quarter. … The Capital City Go-Go, Washington’s G League affiliate, will flex assign players to the Erie Bayhawks, New Orleans’ G League affiliate, during the season that begins next month in Orlando, Florida.

Heat: Visit the Celtics on Sunday.

Wizards: Host the Suns on Monday.