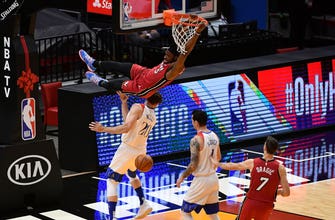 MIAMI (AP) — Erik Spoelstra remained perfect on Christmas, and a record-tying show from Duncan Robinson helped him stay that way.

Robinson made seven 3-pointers — tying the most on Christmas ever — and scored 23 points, and the Heat beat the New Orleans Pelicans 111-98 to start the NBA’s holiday quintupleheader Friday.

Spoelstra moved to 8-0 on Christmas as coach of the Heat. Goran Dragic scored 18 points, Bam Adebayo had 17 and Avery Bradley finished with 12. Precious Achiuwa and Tyler Herro each scored 11 for Miami.

Zion Williamson had 32 points and 14 rebounds for New Orleans, and Brandon Ingram finished with 28. But the Pelicans got outscored 48-30 from 3-point range and shot only 40% to Miami’s 51%.

JJ Redick’s 3-pointer with 7:43 left cut Miami’s lead to 91-85 and came during a stretch when the Heat went five minutes without a field goal. But the Pelicans got no closer.

The Heat restored order by scoring 11 of the game’s next 13 points, and when Achiuwa — the rookie who had strong defensive minutes — forced Williamson into a turnover with 3:55 left, the entire Miami bench rose in celebration.

New Orleans led 17-9 midway through the opening quarter — and got outscored 52-21 by Miami over the next 13½ minutes, with the Heat hitting nine of their 13 first-half 3s in that span on the way to a 23-point lead. Robinson made three 3s in a two-minute stretch midway through that burst.

The Heat led 66-53 at halftime. Ingram’s runner with 2:23 left in the third cut Miami’s margin to single digits for the first time since the early going and his 3-pointer with 0.6 seconds left in the period got the Pelicans back within 88-79 going into the fourth.

Pelicans: Williamson played 20:53 in the first half. His most in a half last season was 17:18. … Redick fouled out for the second time in 898 career regular-season games, and missed six of his seven shots. … The Pelicans are now 1-3 on Christmas.

Heat: Andre Iguodala started the second half for Butler. … Miami improved to 11-2 all-time on Christmas. It hadn’t played on the holiday since beating New Orleans in 2015, and hasn’t lost on Dec. 25 since 2007.

Heat forward Moe Harkless this week helped pay rent for about 50 New York families in dire economic circumstances this holiday season, plus covered lost wages and other essential expenses. “Means the world to me,” Harkless said.