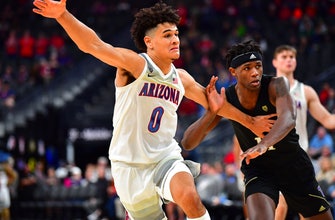 The following is a press release from the Dallas Mavericks:

DALLAS— The Dallas Mavericks announced they have selected forward Josh Green with the 18th overall pick and forward Tyrell Terry with the 31st overall pick in the 2020 NBA Draft.

Green (6-6, 210) was an early-entry candidate to this year’s draft after spending one season at Arizona. In his lone season with the Wildcats, the native of Australia started all 30 games he appeared in and averaged 12.0 points, 4.6 rebounds, 2.6 assists and 1.53 steals per game. Green ranked sixth in the PAC-12 in steals last season.

Terry (6-2, 160) was also an early-entry candidate to this year’s draft after spending one season at Stanford. The Minneapolis native played 31 games with the Cardinal, averaging 14.6 points, 4.5 rebounds, 3.2 assists and 1.39 steals per game. Terry’s 14.6 ppg ranked second in scoring average amongst freshman in Stanford history.