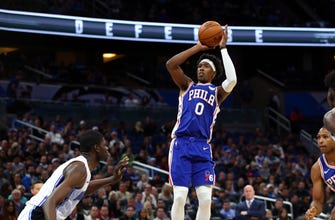 The following is a press release from the Dallas Mavericks:

DALLAS — The Dallas Mavericks have acquired guard/forward Josh Richardson and the draft rights to Tyler Bey, the 36th overall pick in the 2020 NBA Draft, in exchange for guard Seth Curry.

After being drafted by the Heat with the 40th overall pick of the 2015 NBA Draft, Richardson played four seasons in Miami before being dealt to Philadelphia as part of a four-team deal last summer. The Edmond, Oklahoma, native played four years at Tennessee where, following his senior season, he was named First Team All-SEC and to the SEC All-Defensive and the Defensive All-American teams.

Bey (6-7, 216) was an early-entry candidate to the 2020 NBA Draft following his junior season at Colorado. The Las Vegas native averaged 13.8 points, 9.0 rebounds, 1.5 assists, 1.5 steals and 1.0 blocks while shooting 53.0% (140-364 FG) from the field last season for the Buffaloes. Among conference leaders, the 2019-20 Pac-12 Defensive Player of the Year ranked first rebounding, fifth in steals, seventh in blocks and ninth in field goal shooting.

Last season, Curry averaged 12.4 points, 2.3 rebounds and 1.9 assists in 64 games in his second stint with the Mavericks.