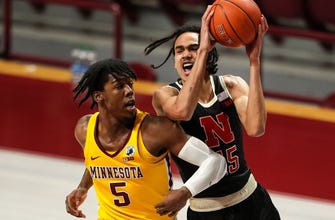 Brandon Johnson scored 13 points with 10 rebounds for the Golden Gophers (12-7, 5-7 Big Ten Conference), who had lost three straight and five of six, although the previous two wins were against current No. 3 Michigan and No. 4 Ohio State.

Minnesota weathered a drought of 7 1/2 minutes, missing 17 straight shots as Nebraska cut a 19-point deficit to 52-45 midway through the second half. Without leading scorer Teddy Allen, the Cornhuskers could get no closer, giving Carr, who only played 19 minutes because of foul trouble, time to get untracked. It was the fewest minutes played in a game in two seasons at Minnesota.

Allen, who had only three points on 1-for-10 shooting on Saturday at Michigan State, was held out of the game for what the Big Ten Network reported as “a failure to meet internal expectations.”

Lat Mayen tied his career high with 15 points for Nebraska (4-10, 0-7), which lost its seventh straight with six games postponed since its last win on Dec. 17. Shamiel Stevenson added 14 points.

In their final regular season game last year, the Gophers beat Nebraska 107-75 behind a program-record 18 made 3-pointers — including eight by Gabe Kalscheur. On Monday, the Gophers were 8 for 36 from 3-point range and Kalscheur went 1 for 9 to finish with 10 points.

Mashburn hit a 3-pointer and Carr quickly followed with a three-point play and the Golden Gophers led 23-10 less than seven minutes in. Derrick Walker scored four straight points for Nebraska but then Johnson had a 3 and a pair of free throws and Mashburn scored for a 30-14 lead.

The lead stayed in double figures and was 45-30 at the half, when Nebraska was shooting 35% with no 3s and 10 turnovers.

The Cornhuskers had a better second half with Mayen scoring 13 points but mostly it was the Gophers going cold. They were 3 for 18 behind the arc and 30% overall (10 of 33). Carr had 13 points.

Purdue is at Minnesota on Thursday when Wisconsin is at Nebraska.