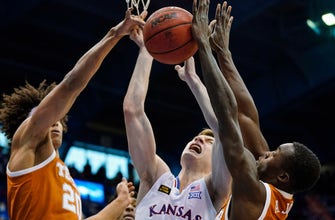 LAWRENCE, Kan. — Texas stumbled into Allen Fieldhouse on Saturday well aware of its humbling track record in the storied arena.

The Longhorns sauntered out having made some much better history.

After winning once in their previous 17 tries in the Phog, the nation’s eighth-ranked team turned a narrow halftime lead into a record-tying rout. Courtney Ramey scored 18 points to lead five players in double-figures scoring, and Texas beat the No. 3 Jayhawks 84-59 to match the most lopsided win by an opponent in the 65-year history of the building.

“I’m just happy for our guys. They put so much energy and time and effort into everything,” said coach Shaka Smart, whose Longhorns never trailed. “These last several months and having guys canceled and guys having things up in the air, having a couple guys unavailable, but the guys just hung in there and controlled what they could control.”

They certainly controlled the Jayhawks.

“The message is pretty obvious: This doesn’t happen in the Fieldhouse,” said Jalen Wilson, who led the Jayhawks with 20 points. “This is very embarrassing. We’re a good team and today we didn’t show what we’re capable of.”

Ochai Agbaji also had 11 points for the Jayhawks (8-2, 1-1), who shot just 31% from the field and went 3 of 23 from beyond the arc while losing their first game since their opener against top-ranked Gonzaga.

“There were blank stares in the huddle,” Kansas coach Bill Self said. “We have to be a lot better mentally. A lot tougher.”

Coincidentally, it was the first top-10 matchup for Texas in a Big 12 regular-season game since beating then-No. 2 Kansas on Jan. 22, 2011. The win also snapped a three-game skid against the Jayhawks, who had won 16 of 17 against the Longhorns and had been 16-1 against them in games played inside 65-year-old Allen Fieldhouse.

Kansas hadn’t taken the floor since Dec. 22, when it routed seventh-ranked West Virginia. The 12-day layoff was the longest in the regular season Self, who took over the program before the 2003-04 season.

The Longhorns had been off even longer. Thanks to an uptick in COVID-19 positives at Texas A&M Corpus-Christi, their game Tuesday night was canceled. That left Texas without a game since beating Oklahoma State on Dec. 20.

The rust was evident for both teams in the first half.

Kansas missed its first eight shots and finished 1 of 7 from beyond the arc in the first half. Texas fared little better from the arc and coughed up 10 turnovers, though a late run fueled by Kai Jones off the bench resulted in a 37-29 halftime lead.

The Jayhawks trimmed their deficit to four early in the second half, but consecutive 3-pointers by Andrew Jones — who had been 1 for 8 from the field — along with Coleman and Ramey gave Texas its biggest lead at 50-38 with 15:42 to go.

Relying on their experience, the Longhorns refused to pull back on the pressure. They began to create turnovers on the defensive end that led to easy layups, and their outside shooting continued to sizzle. Their advantage swelled to 63-47 with 8:51 to go, forcing Self to call a timeout — only for the Jayhawks to immediately turn it over again.

Sims added a dunk, Donovan Williams a 3 and Self burned another timeout as the Texas lead stretched even more.

At that point, it looked as if the Longhorns would have a shot at the most lopsided win by an opponent in Allen Fieldhouse history. Tyon Grant-Foster’s basket with just over a minute left prevented that from happening.

“The biggest thing I said when we got into the locker room after the game is, ‘We’re supposed to do this,’” Ramey said. “This shouldn’t be a shock or a surprise. When you go (and) be us, you come out with a dominant performance. Now we have to keep it rolling.”

The Jayhawks played without Bryce Thompson, their top player off the bench, after Self said the freshman guard hurt his back on “a hard fall in a bad spot” in practice. Thompson is averaging 5.4 points in 17.5 minutes per game.

Texas followed the blueprint for beating the Jayhawks perfectly. They shut down the perimeter, where Kansas had been so good in its win over West Virginia, and dominated on the glass to prevent second-chance opportunities.

Kansas dealt with a much longer team in beating then-No. 20 Kentucky earlier this season. But the Jayhawks struggled with what Texas brought to the floor. Big man David McCormack was entirely ineffective in the paint and their guards, who rely on slashing through the lane to create shots, kept finding their path blocked by burnt orange.