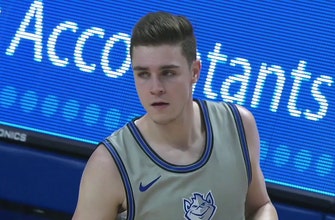 Jordan Goodwin had 15 points, 11 rebounds and six steals for Saint Louis (4-0), posting the 26th double-double of his career. The senior guard became the Billikens’ all-time leader in steals, finishing the night with 194 career thefts and surpassing Anthony Bonner’s previous record of 192. Yuri Collins added 12 points and nine assists, and Javonte Perkins had 10 points.

Rylan Bergersen had 16 points for the Bears (0-3). Jared Chatham added 13 points and DeAndre Jones had 10 points and eight assists.

Travis Ford on Jordan Goodwin, who became @SaintLouisMBB‘s all-time leader in steals tonight: “His passion, his competitiveness is contagious to everybody on our team. He’s going to go down as one of the greatest players to ever play here.” #Billikens pic.twitter.com/XutXiE6xiP