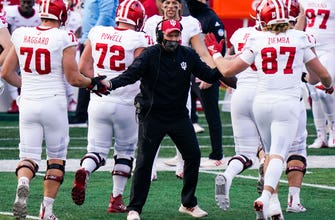 Tom Allen, whose Hoosiers enjoyed their best season in decades, was named The Associated Press Big Ten Coach of the Year on Tuesday.

Allen led No. 7 Indiana (6-1) to its highest ranking since 1967, knocking off three ranked teams along the way. Its only loss was 42-35 at Ohio State in a game that went down to the final play. Allen is 14-6 over two seasons at a school that hasn’t had back-to-back winning seasons since 1993-94.

Purdue wide receiver David Bell, a first-team pick, was the only Boilermakers player on either squad.

Fields led Ohio State to a 6-0 record and the No. 3 seed in the College Football Playoff. He has completed 73% of his passes this season for 1,521 yards, 15 touchdowns and five interceptions.

Nixon led the Big Ten with 13.5 tackles for loss, including 5.5 sacks, and was part of a defensive line that allowed a conference-low 2.84 yards per rushing attempt.

Joseph leads the nation with six interceptions and is the first Northwestern player since at least 1996 with multiple games with two or more picks.