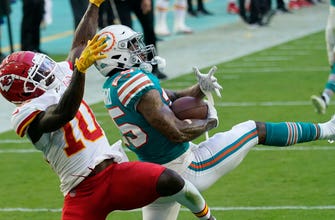 KANSAS CITY, Mo. — It is perhaps a strange argument to make that the Kansas City Chiefs have a problem with complacency.

This is a team that returned largely intact from the one that ended a five-decade championship drought in dramatic fashion last season, rallying to beat the San Francisco 49ers in the Super Bowl. And despite all the resulting adoration, they’ve won 12 of their first 13 games this season, clinching a fifth straight AFC West title with a win in Miami on Sunday.

“That’s one of the biggest challenges any championship team has, is complacency,” Chiefs chairman and CEO Clark Hunt said. “It’s easy to look back at what you accomplished last year and not focus on the task at hand. Andy (Reid) and the team leaders have done a really good job of keeping the team dialed in.

“To get to 12 victories at this point,” Hunt added, “is a tremendous accomplishment.”

One the Chiefs have never accomplished before.

Yet the Chiefs, who lead the AFC and are positioned for a first-round playoff bye, also have gotten into a dangerous habit of letting big leads slip away — or, put another way, failing to bury opponents when they have a chance.

They had a 33-24 lead in the fourth quarter against the Panthers before surviving for a 33-31 victory. They gave up the go-ahead touchdown to the Raiders with 1:43 left before rallying to retake the lead with 28 seconds to go in a 35-31 escape job. They led the Buccaneers 27-10 at the end of the third quarter before hanging on for a 27-24 win. And on Sunday, they built a 30-10 halftime lead before they needed to pounce on an onside kick to secure a 33-27 victory.

None of the Chiefs’ past five wins has been by more than one possession. Four of them should have been.

“Probably the primary thing is that we end up winning the game, which I don’t want to lose focus on,” Reid said after the latest close call. “They’re a good football team, playoff-caliber team. We could have helped out offensively, too, so it was a team thing that we just — we need to finish.”

Indeed, it’s not as if the defense is entirely to blame, though it has allowed fourth-quarter yards by the hundred. But special teams have been poor and the offense has too often gone into an overly conservative shell.

“I’ll take responsibility for that. I could have been more aggressive as the play-caller and so on,” Reid said, “so it starts with me and that’s where we roll.”

Travis Kelce has gone over 100 yards receiving in five of his past six games, and his 1,250 yards lead the league. He also has nine touchdown receptions, solidifying his place as Patrick Mahomes’ go-to playmaker when things break down.

“Trying to take advantage of the opportunity that I have here in Kansas City every single day, on and off the field,” Kelce said. “That’s my goal.”

For the first time this season, the Chiefs had to overcome some significant turnover trouble. Mahomes had thrown just two interceptions all season before tossing three in Miami. Wide receiver Mecole Hardman also fumbled after a long catch.

Rookie defensive end Mike Danna had his best game with the Chiefs, pulling down the Dolphins’ Tua Tagovailoa for a sack among his three tackles for loss. The fifth-round pick out of Michigan has been a pleasant surprise after missing time with an injury earlier this season.

Anthony Sherman’s value has dwindled the past couple of years as the Kansas City offense has gone away from using a fullback. That makes his wide-open dropped pass — one of his rare chances to contribute — even more egregious.

Offensive lineman Mike Remmers hurt his back and did not return against Miami.

10 — You could pick five for the number of consecutive division titles, or 12 for the most wins through 13 games in franchise history. But perhaps neither of those would have happened without a club-record 10 consecutive road wins. It’s the longest active streak in the NFL.

The Chiefs visit New Orleans on Sunday before finishing the regular season at home against the Falcons and Chargers.