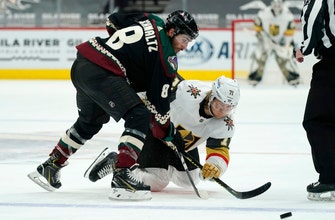 GLENDALE, Ariz. (AP) — Conor Garland had a goal and an assist, Darcy Kuemper stopped 29 shots and the Arizona Coyotes handed the Vegas Golden Knights their first loss of the season, 5-2 on Friday night.

The Coyotes bounced back from a drubbing two nights earlier in Vegas with one of their best games of the early season.

Kuemper made some spectacular saves and Arizona got contributions throughout the lineup after losing the first two games of four straight against the Golden Knights.

Nick Schmaltz scored for the third straight game and had an assist. Christian Dvorak also had a goal and an assist. Derick Brassard scored his first of the season and Jordan Oesterle closed it out with an empty-net goal.

Vegas’ Shea Theodore scored his third goal in two games and had an assist. Cody Glass scored his first goal and Robin Lehner allowed four goals on 25 shots for the Golden Knights (4-1), who had been off to the best start in the franchise’s four-year history.

Vegas rallied from a two-goal deficit to win the first game against Arizona 4-2 and blew out the Coyotes 5-2 in Wednesday before heading across the desert.

Theodore scored on the Golden Knights’ first shot to start the rout on Wednesday. Dvorak scored on Arizona’s second shot Friday, knocking in a rebound on a power play 3 1/2 in.

Theodore tied it 1:19 into the second period, picking off a turnover in Arizona’s end and beating Kuemper stick side with a wrister.

Brassard, one of six forwards signed by the Coyotes to add some grit, made it 2-1 with a slap shot from the left face-off midway through the second period.

Schmaltz took a more patient route on his goal, holding the puck until Lehner went down before lifting in a shot from a tough angle.

Garland made it 4-1 less than two minutes into the third period, deking Lehner with a nifty move and slipping it between the goalie’s pads.

Glass scored midway through the third period late in a double-minor high-sticking penalty on Jason Demers.

The Golden Knights and Coyotes close out the four-game stretch Sunday in Arizona.