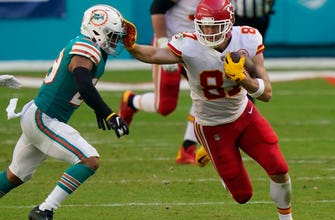 KANSAS CITY, Mo. — Travis Kelce was pondering his career after his most recent eye-popping performance, this one against the Miami Dolphins to clinch the AFC West for the Kansas City Chiefs, when he suddenly paused to ask himself a seemingly obvious question.

Yes, he’s 31. But the All-Pro tight end is hardly playing like it.

With six 100-yard receiving games already, Kelce is poised to become the first tight end in NFL history to lead the league in receiving yards. He has 1,250 yards with three games still to play, giving him a 70-yard lead over Seattle Seahawks wide receiver DK Metcalf and another 13 yards over the Buffalo Bills’ Stefon Diggs — oh, and teammate Tyreek Hill is at 1,158 yards.

Kelce is fifth in the league with 90 catches and tied for sixth with nine touchdown grabs. He also tops the league with 21 catches of at least 20 yards and 67 catches that have produced first downs, and he trails only New Orleans Saints running back Alvin Kamara — who will share the field with him Sunday — for yards after the catch.

“He’s very nimble and very light on his feet for a guy of his stature,” Hill said. “When I first got here, I was like, ‘Man, this big guy can run routes. Are you serious?’ But dude is crazy good. Kelce is crazy good.”

Beyond his peerless route-running and elite hands, Kelce’s game-day acumen is off the charts.

He has a knack for finding the soft spot in the defense, eluding tacklers for extra yardage and helping quarterback Patrick Mahomes when he’s feeling the pressure and fleeing the pocket. Part of that is owed to Kelce’s own background as a quarterback, which gives him insight into what Mahomes is seeing when he casts his gaze downfield.

“If you look at history, look at the seasons tight ends have had, he’s had one of the best as far as catching the ball and being a playmaker in the offense,” Mahomes said, “and then you watch the way he blocks for teammates. It’s truly been a special season for a tight end, and not just a tight end, but a teammate and a player.”

To wit: Kelce recently was awarded a coveted 99 rating on the Madden video game, and he was the Chiefs’ nominee for the Walter Payton Man of the Year Award for his work with his 87 & Running Foundation and Operation Breakthrough, which strives to provide opportunities and education for children from impoverished backgrounds.

“I’ve had a chance to be here and watch him grow,” Chiefs coach Andy Reid said, “and just seeing where he’s at now, the whole center that he’s working on right now is a beautiful thing for our community, for kids. I’m proud as heck of him. He does such good work in the community, like he does on the field. He’s got a good heart, a big heart.”

Who would have thought it when Kelce was picked in the third round of the 2013 draft out of Cincinnati, where he was suspended for an entire season for violating team rules? Or when he missed most of his rookie season with a knee injury?

“Watching him do these things, it does not shock or surprise me,” Chiefs offensive coordinator Eric Bieniemy said. “Now, in an effort to make sure I’m respecting my elders, and playing against guys from the past, the pass game has changed. Back when I played, guys were playing with their hand in the dirt and making plays from there. We have the flexibility to line Kelce up all over the field and take advantage of some of the new passing rules.

“But I’ll say this,” Bieniemy continued: “Kelce works his tail off.”

“I’m so fortunate. And I’ve said it since the day I got here, and I’ve grown to know it even more since I’ve technically — since I’ve grown up in Kansas City over the last eight years,” Kelce said. “And I plan on playing here for the rest of my career. The people in this organization, they make you want to come to work every single day. It’s fun.”

NOTES: TE Ricky Seals-Jones and RB Darwin Thompson did not practice Thursday with an illness unrelated to COVID-19. OL Eric Fisher (back) and Mike Remmers (back) and LB Damien Wilson (knee) also did not participate.