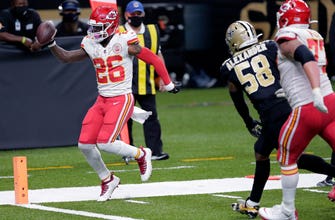 Kansas City Chiefs running back Le’Veon Bell, who was released by the then 0-5 Jets, can only marvel at the turn of events that landed him in Super Bowl 55.

“It’s been an interesting season, to say the least for me — one of my more intriguing seasons,” Bell said. “When I first started the season, I was with New York and I was kind of fighting an uphill battle with everything that was going on over there. It didn’t work out for whatever reason. I ended up coming over here and the first day here, I loved it right away.”

And what’s not to like? It’s not often a player goes from losers to winners — and maybe winning it all — in the same season. The same is true for Tampa Bay Buccaneers running back Leonard Fournette, who was rescued from the Jacksonville Jaguars, who cut him after training camp in August, by the Tampa Bay Buccaneers, the Chiefs’ opponent Sunday.

“I’m just blessed with the opportunity I have now to play in this big game with a lot of other great players on this team and the other team,” Fournette said. “I feel good, man.”

Like Fournette, who complements Ronald Jones in the backfield, Bell is a complementary piece for the Chiefs, backing up rookie Clyde Edwards-Helaire and splitting carries with Darrel Williams. He had a career-low 328 yards rushing and two TDs in 11 games, nine with Kansas City.

“I really like him — I like him as a kid, I like him as a player,” coach Andy Reid said. “He brings that veteran experience. He’s been the best in the business at what he’s done. He’s handled this role well.”

After playing just two games for the Jets and being released when they couldn’t deal him, Bell had a difficult choice. Miami wanted him, but so did Kansas City.

“I made the decision to come here, to play with a lot of great players and coach Andy Reid,” he said. “It probably was tougher than my free agency decision, for real.”

Once one of the most dynamic playmakers in the NFL with Pittsburgh, Bell sat out a season in a contract dispute before signing a four-year, $52.5 million deal with the Jets in 2019. That stint didn’t even last two full seasons, a disappointing end to what was supposed to be a massive comeback.

But that could come Sunday.

“It means everything in the world,” Bell said. “Ever since I’ve been playing this game since the age of 4 1/2, this has been the reason why you play it. I’ve watched every Super Bowl since I was little kid, as long as I remember, always envisioning that I would be in the game.

“So now that I’m eight years into the league now and I finally got here, you know, it was like a dream come true. And obviously, I just want to finish the job.”