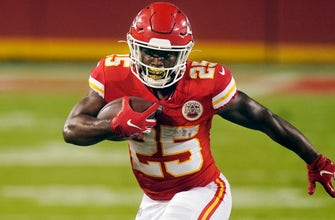 KANSAS CITY, Mo. — The Kansas City Chiefs have Clyde Edwards-Helaire but are missing fellow running back Le’Veon Bell and veteran wide receiver Sammy Watkins for their AFC Championship Game against the Buffalo Bills on Sunday.

Edwards-Helaire has been out since mid-December, when the 32nd overall draft pick sustained a high-ankle sprain in a game in New Orleans. Edwards-Helaire returned to practice for a single day before he was inactive in last week’s divisional-round win over the Browns, but he looked good this week in practice and was active for the Bills.

Edwards-Helaire was fourth among all rookies with 1,100 yards from scrimmage, even though he played just 13 games.

Chiefs quarterback Patrick Mahomes, who was cleared Friday of the concussion he sustained last weekend, was on the field for pregame warmups and moving around well. Mahomes had no injury designation on the final injury report, even though the reigning Super Bowl MVP also has been dealing with a case of turf toe this week.

“It’s feeling a lot better,” Mahomes said Friday. “The next day it was very sore and every single day since then has gotten a lot better. It’s stuff you deal with being a football player. You deal with injuries. But lucky enough for me, it wasn’t that bad.”

Bell played sparingly behind fill-in starter Darrel Williams against Cleveland, but a knee injury that popped up during the game lingered into this week. The former Steelers standout practice Wednesday before the knee swelled up again, and Bell missed the final two days of practice and was listed as questionable on the final injury report.

The oft-injured Watkins, who also was questionable after practicing all week, has not played since hurting his calf in Week 16 against Atlanta. Watkins has only appeared in parts of 10 games because of injuries this season.

Joining them on the inactive list for Kansas City are linebacker Willie Gay Jr., who had been ruled out with an ankle injury; defensive linemen Tim Ward and Khalen Saunders; offensive lineman Yasir Durant; and cornerback BoPete Keyes.