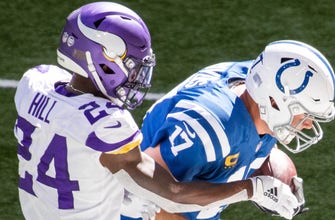 Hill, who hasn’t played since Week 4 due to a foot injury, has appeared in four games (two starts) with Minnesota, logging 24 tackles, three passes defensed and his first career sack. He joins fellow cornerbacks Mark Fields II and Mike Hughes on injured reserve. Due to new NFL rules in 2020, Hill will have to miss at least three games while on IR. There is no limit to IR activations this season.

In four contests with the Vikings, Davis has registered six tackles in 2020. He has missed the past two games after being placed on the COVID-19 reserve list Oct. 31.

Cutting has played every game at long snapper for the Vikings since he was selected in the seventh round of the 2019 draft. Minnesota does not have a backup long snapper listed on its team website.

Gedeon, who started five games at linebacker for Minnesota in 2019, didn’t play a snap all season. He was placed on the physically unable to perform (PUP) list in early August. If Gedeon goes unclaimed on waivers, the Vikings can add him to their practice squad.

Earlier on Tuesday afternoon, the Jacksonville Jaguars claimed kicker Chase McLaughlin off the Vikings’ practice squad. McLaughlin will be the Jaguars’ sixth kicker this season.