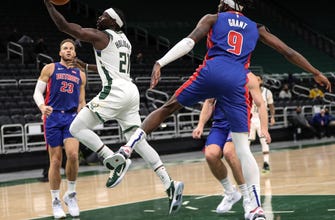 MILWAUKEE — Giannis Antetokounmpo scored 25 points and Khris Middleton added 23 as the Milwaukee Bucks rolled past the Detroit Pistons 130-115 on Wednesday night for their third straight victory.

This marked the second time in three nights that the Bucks and Pistons have faced off in Milwaukee. The Bucks (5-3) beat the Pistons 125-115 on Monday and have now won their last nine regular-season meetings with Detroit.

The Pistons (1-7) had fallen by 10 points or fewer in each of their first six losses but never had much of a chance in this one. Milwaukee (5-3) was ahead 82-56 at halftime and led by as many as 34 in the third quarter and coasted to the win.

Detroit’s Jerami Grant had 31 points to lead all scorers.

The Bucks improved to 4-0 at home, where they’re outscoring teams by an average margin of 23.5 points. The Bucks finish their current five-game home stretch by hosting Utah on Friday and Cleveland on Saturday.

Rose left the game early with a bruised right knee.

On the night after a prosecutor decided not to file charges against a white police officer who shot a Black man in Wisconsin, both the Bucks and Pistons offered their response at the start of the game.

Jacob Blake was left paralyzed after getting shot in the back multiple times by Kenosha police officer Rusten Sheskey on Aug. 23. The Bucks sat out a first-round playoff game with the Orlando Magic last summer to protest that shooting.

Kenosha County District Attorney Michael Graveley announced Tuesday that no charges would be filed because he couldn’t disprove Sheskey’s contention that he acted in self-defense out of fear Blake would stab him. At a pregame shootaround, Lopez called the decision “obviously disappointing, very disheartening.”

Pistons: Rookie guard Killian Hayes tore the labrum in his right hip during the third quarter of Monday’s game. The Pistons announced the severity of Hayes’ injury Wednesday without offering a timetable for his potential return. Hayes was the No. 7 overall pick in the 2020 draft. He had averaged 4.6 points and 21.1 minutes through his first seven games.

The Bucks host Utah on Friday as they continue this five-game homestand. This will mark the first time these two teams have met since Nov. 25, 2019.

The Pistons return home to face Phoenix on Friday. Detroit has swept its two regular-season matchups with the Suns each of the last three years.