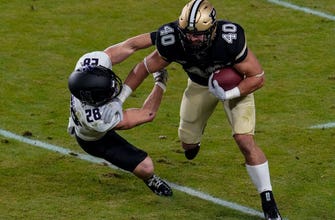 MINNEAPOLIS — After the 2019 season for Minnesota signaled a breakthrough for a long-middling program, coach P.J. Fleck has found himself in a seemingly unfamiliar situation in his fourth year.

The Golden Gophers, at least in the Big Ten standings, have regressed.

With six regulars from last year’s team now in the NFL, including four draft picks on defense, the Gophers have been on a learning curve made steeper by the lost practice time — and non-conference games — to the pandemic. They have seven new starters on defense, undoubtedly a direct link to their last-place rank in the conference in points allowed per game (35.8).

“The only way they’re going to get experience is by playing, and it’s unfortunate that it’s that type of year that you don’t have the development that you can find out a lot, that you’re finding out a lot during the game,” said Fleck, whose team hosts Purdue on Friday night.

The Gophers were even more vulnerable last week during a 35-7 loss to Iowa with cornerback Benjamin St-Juste out for an unspecified reason and linebacker Mariano Sori-Marin ejected in the second quarter for targeting.

“You can see the skill set, but you have to now develop that, and it just goes back to every year is its own entity,” Fleck said. “It’s not just a continuation of the next year. Every team has its own fingerprint, and this team has a completely different fingerprint than last year.”

The Boilermakers, meanwhile, have an opportunity to start 3-1 for the first time since 2012. They haven’t finished a season two or more games above .500 since going 8-5 in 2007. After this week, consecutive home games against Rutgers and Nebraska could give them even more runway to build momentum for the Dec. 12 game against rival and No. 9 Indiana.

Purdue is 0-5 at TCF Bank Stadium since it opened for Minnesota in 2009, though, and has lost six of the last seven in the series. Last year in West Lafayette, Indiana, the Gophers racked up 488 total yards in a 38-31 victory as Tanner Morgan completed 21 of 22 passes for 396 yards and four touchdowns. So, this is not an opponent the Boilermakers can take casually.

“I know they’re working hard to improve and get better. They’ll be well-coached. They’ll be fired up to play us,” Purdue coach Jeff Brohm said. “We’re going to have our work cut out for us.”

The Boilermakers, who lost to now-No. 19 Northwestern last week after their Nov. 7 game was canceled due to Wisconsin’s COVID-19 outbreak, have an imbalance issue on offense, again, leading the Big Ten in passing while last in the league in rushing.

Zander Horvath’s streak of three consecutive games with at least 100 rushing yards ended last week with a thud when Purdue netted just 2 yards on 17 attempts against Northwestern. The 230-pound junior shifted his impact to the passing game, with a career-high 100 receiving yards — the most by a Boilermakers running back since the 1997 Alamo Bowl.

Horvath has 53 of the team’s 75 carries. Brohm said he hopes to lessen some of his load now that King Doerue has nearly recovered from a hamstring injury that kept him out of the first two games.

Northwestern coach Pat Fitzgerald called Purdue’s David Bell the nation’s best wide receiver. The Big Ten Freshman of the Year in 2019 ranks second in the FBS in receptions per game (10.3). If there’s anyone who could challenge Fitzgerald’s declaration, Minnesota has him with Rashod Bateman. Widely projected as a first-round draft pick next spring, Bateman is fourth in the conference in receiving yards per game (103.3).

Phillip Howard replaced St-Juste last week, his first career start on defense and first on offense since starting seven games at wide receiver as a freshman in 2017. The product of Robbinsdale Cooper High School, just 15 miles west of campus, considered transferring this summer for more playing time elsewhere but decided to stay for friendship and loyalty.

“I didn’t feel like giving up, so I stuck it out,” Howard said.

Purdue wide receiver Rondale Moore, the first true freshman in Big Ten history to be named a consensus All-American in 2018, injured his hamstring during last year’s loss to the Gophers. He hasn’t taken a snap in a game since that day on Sept. 28, 2019.

“When he’s healthy, we’ll put him on the field,” Brohm said. “He’s done everything we’ve asked and more, and he’s worked hard to get back on the field. We’re hopeful that will happen here soon.”