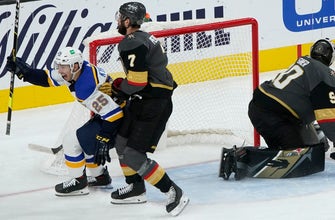 The National Hockey League announced Monday that the postponed game between the Blues and Golden Knights will now take place on Monday, March 22, at 9 p.m. CT. The rescheduled game will break up what was set to be a five-day break for the Blues from March 21-25.

In addition, the game between the Blues and the San Jose Sharks, originally scheduled for Feb. 26, has been moved to Monday, March 8, at 9:30 p.m. CT. The change in scheduling breaks up what would have been a back-to-back series on Feb. 26-27 and will prevent the Sharks from having to play three nights in a row after they rescheduled one of their own postponed games against the Golden Knights for Thursday, Feb. 25.