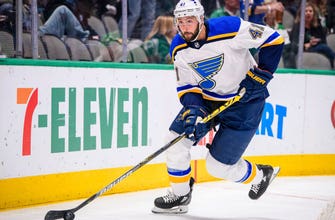 It took only two games for the St. Louis Blues to make their first use of the roster apparatus that is designed to help teams get through a season of injuries and, presumably, pandemic-related issues.

The issue in question was of the injury type, that of Robert Bortuzzo, who was knocked woozy, and eventually from the game, by a hit from Colorado’s Valeri Nichushkin early in the Avalanche’s 8-0 win over St. Louis on Friday night. On his first shift of the game, Bortuzzo was struck from behind in what appeared to be a shot to the head from Nichushkin’s shoulder. The defenseman’s head hit the glass.

The NHL told the Blues that its player safety department would not hold a hearing on the hit, indicating that it was within the rules, according to Blues general manager Doug Armstrong, the St. Louis Post-Dispatch reported.

The Blues placed Bortuzzo on injured reserve with an upper body injury. Taking his place on the active roster is defenseman Niko Mikkola, who was recalled from the taxi squad. Continuing the domino effect, defensemen Jake Walman and forward Jake Neighbours were reassigned to the taxi squad from their AHL assignments.