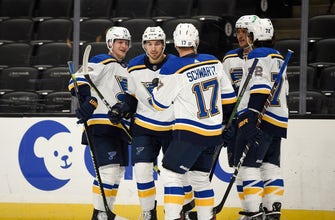 First, it was a two-game series against Arizona in St. Louis. Then, with the postponement of two games against Colorado, it became four in a row between the Blues and Coyotes at Enterprise Center. A trip to Minnesota, even for a single game, then was scuttled, setting up two more Blues-Coyotes game, this time in Arizona.

That unintentional six-game series became a seven-game set Tuesday when the Blues announced that they would play the Coyotes on Friday night, making it three games the teams will play in Arizona before either team plays anyone else.

It isn’t a playoff series, but it sure looks like one — seven straight games between two opponents in the first month of the NHL’s condensed regular season.

The Blues won the first of the four games already played against the Coyotes, who then won the next three, including a 4-3 shootout win Monday night. The next three games will be played at 8 p.m. CT Friday, 7 p.m. Saturday (an hour later than originally scheduled) and 3 p.m. Monday.

If the Blues get through Monday without any further schedule changes, they’ll return home to face the Sharks and Kings, their first new opponents since Jan. 31, when they beat the Ducks in St. Louis.